Film / Requiem for a Heavyweight 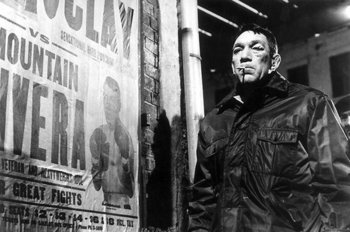 Luis "Mountain" Rivera (Quinn) is a washed-up heavyweight boxer. The film opens with Luis taking a brutal beatdown that ends with a seventh-round knockout, at the hands of Cassius Clay himself. The doctor who examines Luis after the fight says that he should never fight again, due to the risk of blindness from sclerotic damage in his eyes or the risk of death from bleeding on the brain.

Luis's trainer, "Army" (Rooney), wants to help the poorly educated, no-skills Luis get a job. Luis meets a friendly social worker, Grace (Harris), who sets Luis up with an interview to become a camp counselor. However, Luis's deeply cynical manager, Maish (Gleason), who bet on Luis to lose the Clay fight and is deep in debt to gamblers, still needs Luis as a meal ticket.

The screenplay was written by Rod Serling, best known as the creator of The Twilight Zone. The film was a remake of a 1956 episode of Playhouse 90, also directed by Nelson and written by Serling, which starred Jack Palance as the boxer.