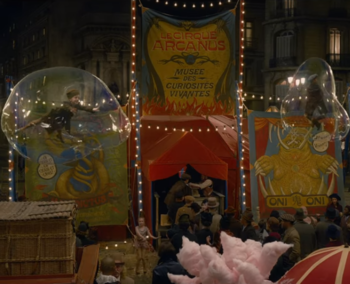 "We play madboys on stage and perform mundane miracles. We're just players in a show, and so we are able to hide in plain sight."
— Master Payne, Girl Genius
Advertisement:

The circus is in town! But this is no ordinary circus. This circus has an advantage over others: The performers are actually magic. Maybe they're looking for victims for some horrific death. Maybe they're hiding from the organization that made them. Maybe when The Masquerade ended, they couldn't get any work but using their powers to entertain. Maybe they're just a bunch of people who love performing and happen to have magic to help them do it. Whatever the reason, they decided the best way to deal with it was to put on a circus.

This trope also includes carnivals of magic. It will generally employ Magicians Are Wizards for most or all of the performers. If the circus performers are hiding from someone, this may coincide with Refuge in Audacity. If the circus is used as a horror setting, it becomes a Circus of Fear. Compare Magical Clown and The Little Shop That Wasn't There Yesterday.