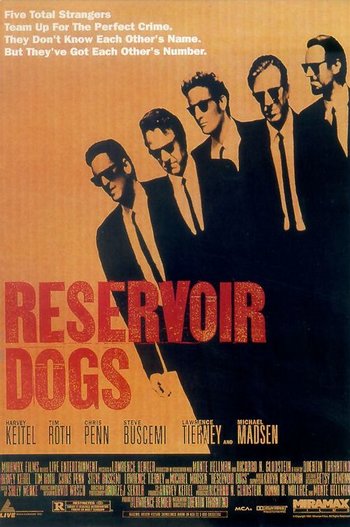 "Fivenote (actually six); It's eight if you count Joe and "Nice Guy" Eddie Cabot men team up to commit the perfect crime. They don't know each other's name. But they've got each other's color."
— Tagline
Advertisement:

Reservoir Dogs is a 1992 crime film that notably marked the debut of Quentin Tarantino as a director and a screenwriter.

The film largely takes place in the aftermath of a jewelry heist gone wrong. After the robbery (which we never see on camera) is interrupted by the police, the surviving criminals — all of whom are using color-based pseudonyms, and none of whom knew the others before this job — escape to an abandoned warehouse and try to work out what went wrong, eventually deducing that there must be an undercover cop in their midst.

Frequent flashbacks give the backstory of several of the characters and fill in the details of the crime, telling the story in a non-linear fashion, which would become Tarantino's Signature Style. In fact, the movie contains a lot of elements Tarantino would use in later films, such as brutal violence, profanity, and Seinfeldian Conversations (though not at the same time).

A video game was produced that followed the plot of the movie and allowed the player to actually commit the heist that was only alluded to in the film. On a similar note, Lionsgate collaborated with Overkill Software on December 2017 to create a free update to, and this appears to be tradition at this point, PAYDAY 2, which paid a Whole Plot Reference homage to this film, and stars a few of the characters to boot!note Mr. Pink, Mr. Blonde and Mr. Brown, with a pissed-off Cabot being mentioned. The heist also reverses the day order, keeping in tune with the theme of the film.

The trope namer, courtesy of Mr Pink who doesn't tip.

The trope namer, courtesy of Mr Pink who doesn't tip.