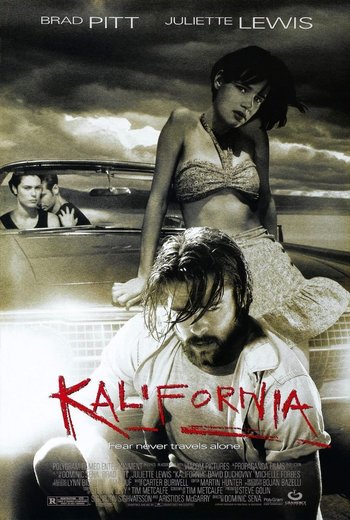 Brian Kessler (Duchovny) works as a journalist who specializes in serial killers. He and his long-term girlfriend, professional photographer Carrie Laughlin (Forbes), are anxious to get away from the midwest and move out west. Since they can't afford to do this on their own, Brian posts an ad on a college bulletin board to find someone else to come along and share the expenses. His ad is answered by Early Grace (Pitt), who, along with his girlfriend Adele Corners (Lewis), also want to leave the area and move to California. Early and Adele are polar opposites to Brian and Carrie; the latter are college educated professionals, whereas the former are incredibly uneducated, impoverished, unemployed, and lowbrow. Unknown to Brian and Carrie, Early is, coincidentally, a serial killer himself. The foursome drive cross-country, making pit stops at famous serial killer locations to help Brian with his upcoming book. Meanwhile, Early leaves a trail of blood in their wake.