I Have a Family 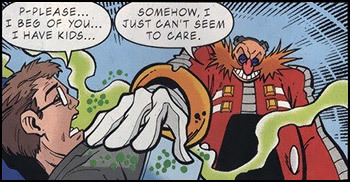 You have kids. They have ambition and an Evil Plan.
Guard: P-please, man. Let me go. Take what you want. I won't stop you... Please. I've got a wife and two kids...
Riddler: Question: Why do people think that being part of the nuclear family gives them a greater right to live? Me, I'm doing my best to ease the burden of overpopulation.
— Batman #452
Advertisement:

Someone is caught by the villain. That someone is being (or is about to be) tortured, or killed. For some reason, while begging/negotiating, said captive may feel the need to inform his tormentor that he has a family. No one really knows why, since this revelation never leads to release or sympathy. The idea seems to be that the victim hopes that his or her captor is not too dark of an Anti-Hero — or at least a Noble Demon — not to hurt the innocent and helpless. Even by proxy. It is common for the villain then to respond he doesn't care or a Big "SHUT UP!" or that he'll even kill their family next just cause said victim brought them up.

In reality, this serves only to demonstrate how big and bad the torturer is.

Other variation of this is that the bad guy or Mooks use this card when defeated in the battle and pleading for their lives. This can be either a trick to have a cheap attack when the Hero lets his/her guard down or it can lead to Heel–Face Turn if The Hero spares the poor mook's life, since Even Evil Has Loved Ones.

Should you be dealing with a Badass Family or The Mafia, you may consider this a threat rather than pleading. If they say this so that they can offer them up first, they're just playing the Dirty Coward.

Often written as "I have a wife/kids."

Ralph tries to save himself and his partner from getting ripped to pieces by an ensuing mob by showing them a photo of his kids.

Ralph tries to save himself and his partner from getting ripped to pieces by an ensuing mob by showing them a photo of his kids.