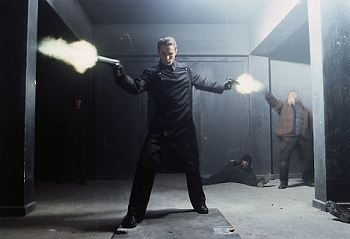 Redefining "no-look shot" while at it.
"Give a guy a gun, and he's Superman. Give him two, and he's God!"
— Superintendent Pang, Hard Boiled, about Tequila Yuen
Advertisement:

Is one gun just not badass enough? Try two!

As far back as the Westerns of the 1950s, The Gunslinger has often strapped on two pistols. Double-fisted firing of handguns just looks cool. Especially when the shooter hits two different targets with one noisy, confusing volley. Slow-mo leaping and dodging with Bullet Time effects not required, but helpful. Bonus points if the weapons of choice are fully automatic machine pistols, like Ingram SMGs or Micro-Uzis, and/or are held Gangsta Style.

This trope is a standard feature of The Western. Usually the two-gun fighter is just that much better than his opponents, that he can draw two guns in the time it takes them to draw one. In The Old West and The Cavalier Years, carrying two pistols was a practical result of long reload times. Combing this trope with Throw-Away Guns meant some people carried several guns strapped to their body to keep up a steady rate of fire.

In police oriented shows, procedurals and action media alike, this trope is largely a villain trait. The two-gun fighter is usually a destructive psycho with no regard for collateral damage, particularly Two Uzi Guy. Police characters and other heroes will usually be contrasted by using proper technique with a single gun, showing their discipline and concern for safety.

In stylized action media, especially Heroic Bloodshed movies and Anime, this trope is one of the primary elements of the art of Gun Fu. The two-gun fighter in these media is often very skilled, has Heroic Ambidexterity, can pick off multiple targets with pinpoint accuracy, use his guns as melee weapons and maybe do other crazy things one would not normally be able to do with a gun.

The style of shooting varies wildly with the user. A guns akimbo shooter might concentrate rapid fire on a single target at a time, simply doubling his output of bullets on the target by using two guns. He might instead track multiple targets at the same time, aiming in different directions or even behind his back. If he has automatic weapons, he may spray both guns wildly to saturate the area with lead. Overlapping with Throw-Away Guns, the character might simply draw a second weapon with his off-hand when his primary weapon runs out to save time in reloading, the classic "New York Reload."

The logical conclusion is to make the wielder Multi-Armed and Dangerous.

As one might expect, real life attempts at executing this go very differently. While it's absolutely possible (and has been demonstrated) to concentrate your fire on one target with two guns, tracking multiple targets at the same time is nigh impossible. The latter has been tried and tested exhaustively (including by Mythbusters), and the consensus is that a human being cannot accurately track and shoot two targets in two different locations at the same time - though that doesn't necessarily dispel the Rule of Cool factor surrounding this trope. And said character might not be an ordinary human being.

Compare Dual Wielding, Sword and Gun, and Firing One-Handed. A popular way of achieving More Dakka. See also Gun Kata and Gun Fu. Like other fighting styles with multiple weapons, this may be a manifestation of Heroic Ambidexterity.

Not to be confused with the 2019 film of the same name, which prominently enforces the trope.

...so he is probably firing alternately from both pistols, shifting his attention between the two.

Live-Action TV
Pinball
Podcasts
Tabletop Games
Webcomics
Web Original
Western Animation
Real Life
By the way, the word "akimbo" does NOT actually refer to Dual Wielding guns. It means standing with your hands on your hips and elbows pointed outward. You can no more have anything but your arms akimbo than you can flip the bird with your ear.
Feedback

The Splat Dualies are a pair of ink pistols that are held in each hand.

The Splat Dualies are a pair of ink pistols that are held in each hand.