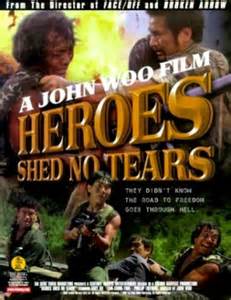 Heroes Shed No Tears (1986) is John Woo’s first film, though it debuted in America after his better-known A Better Tomorrow.

It tells the story of a small group of Hong Konger mercenaries, sent into Vietnam in order to capture a general controlling the drug trade in the Golden Triangle and thus put a stop to the flow of drugs into Hong Kong. Things become more complicated soon after the capture, when they save a French girl from the local Vietnamese colonel, who swears to hunt them down, and joins forces with the general’s Black Squadron, who are determined to rescue him.

The plot has a few additional random elements (like the cannibalism of one of group’s mercenaries or the destructive gambling at the village where the group stops over), but it never gets much deeper than that.