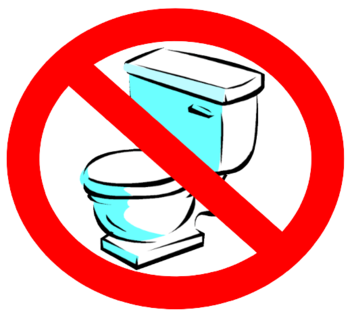 "Well, I feel that films — the film industry — has increasingly failed to reflect reality as people live it. No-one goes for a piss in Star Wars, you can watch the whole of Ghostbusters and no-one brushes their teeth, and in Lost in Translation, nothing happens. At all."
— That Mitchell and Webb Look
Advertisement:

You know that children's book, Everyone Poops? Well, they lied. Not everyone does.

Sure, real people and animals in everyday life might, but you're not likely to see a fictional character going to the bathroom.note Despite the title, this includes peeing. This would detract from the plotline, and besides, nobody really wants to see that sort of thing. If something's not crucial to the story, why include it?

Sometimes, of course, it is crucial to the story, and this trope is averted. Maybe there's a Potty Emergency; maybe someone uses a bathroom break to escape custody; maybe someone suffers an Undignified Death by being killed on the toilet — or worse, killed with a toilet; or maybe there's just some good old-fashioned Toilet Humour. Maybe it isn't crucial to the story but is included anyway.

This trope is sometimes averted without showing anything by simply having a character excusing themselves for a moment. Creatures with A Head at Each End beg the question of whether this trope literally applies.

The page lists lampshades of the phenomenon; straight examples and aversions are too many to count.

Even the dead aren't immune to this trope, as evidenced in the subtrope No Dead Body Poops.

Compare Bottomless Bladder, No Such Thing as Dehydration, Exposed to the Elements, Frigid Water Is Harmless, and No Periods, Period.

The Songdrops song "No One Ever Needs to Pee in Movies", about this trope.

The Songdrops song "No One Ever Needs to Pee in Movies", about this trope.