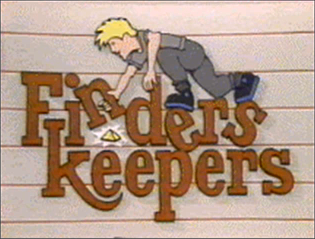 Find it!!!
"If you can find the [object] hidden in this picture, then you could win a run through our prize-filled house, where what you find is what you keep on Finders Keepers!"
Harvey at the start of each show.
Advertisement:

Following the wild success of their first Game Show, Double Dare, Nickelodeon rolled out this show that fulfilled every kid's fantasy of tearing up his bedroom...and the kitchen...and the bathroom...and the sewer.

Finders Keepers was split into two rounds. In the first half of each round, players had to identify hidden pictures to earn money and the right to search one of eight rooms in the life-sized house built onstage. In the second half of the round, teams had 30 seconds to ransack the room in play to find a hidden object that matched a clue read by the host. Finding the object awarded additional money, but failing to do so (or picking a wrong object) gave the cash to the other team. Some of the rooms were normal, such as the living room and bathroom; others were "fantasy" rooms like the Toy Shop, Dracula's Den, and the Fairy Tale Room. The team in the lead after Round 2 won and went on a Room-to-Room Romp through the house in hope of winning more prizes.

The United Kingdom had its own version of the show a few years later on CITV, with several changes to the format; there were no hidden pictures (the teams would earn the right to search rooms by matching clues to answers on a "Memory" style board or playing a toss-up search in the Garage), the Super Search covered all eight rooms instead of just six, and the teams played for points instead of money due to (then-current) UK broadcasting regulations governing cash prizes on children's series. A revival presented by Jeff Brazier was produced in 2006

Not to be confused with the Urban Fantasy webcomic of the same name.