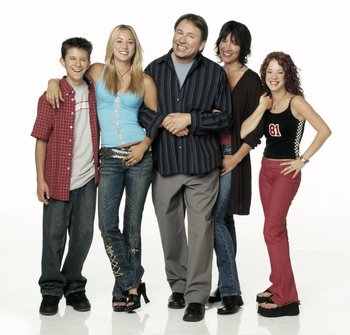 Based on a popular W. Bruce Cameron column, 8 Simple Rules is your basic Dom Com where Paul and Cate Hennessy (played by John Ritter and Katey Sagal) attempt to ride herd on the burgeoning love life of their teenage daughters, bookish Kerry (Amy Davidson) and promiscuous Bridget (Kaley Cuoco). Rounding out the family is son Rory (Martin Spanjers), who is Paul's only other source of testosterone, and thus they bond often.

The premise was good and it worked well... until the show was derailed by the death of John Ritter just two weeks before the season 2 premiere. The resultant Retool brought in Cate's cantankerous father Jim (James Garner) and slacker nephew C.J. (David Spade). Because of Ritter's death, the show's name was shortened from the quirky 8 Simple Rules for Dating My Teenage Daughter to simply 8 Simple Rules. The rating also took a plunge shortly after episodes dealing with Paul's death and it was cancelled within two years.