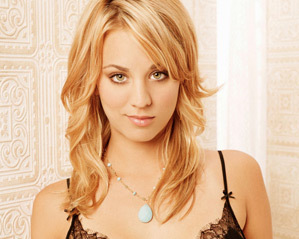 "I like Penny. She's cool. Yeah, she dates some idiots, but, although, so have I. So yeah, I would be friends with her. We'd have a lot to talk about."
—On her The Big Bang Theory character
Advertisement:

Kaley Christine Cuoco (born November 30, 1985 in Camarillo, California) is an American actor known for being blonde, bubbly and occasionally ditzy in a lot of TV shows from the Turn of the Millennium onward.

A California native, she bagged her first film at the age of ten when she played a small supporting role in the sci-fi thriller Virtuosity. She appeared in various TV guest spots, Made For TV Movies and low radar films before getting her big break in 2002. The sitcom 8 Simple Rules saw her playing Bratty Teenage Daughter extraordinaire Bridget Hennessy. The show lasted three seasons, and during its run she also voiced the titular Brandy in the cartoon Brandy & Mr. Whiskers. After 8 Simple Rules was cancelled, she surfaced on the eighth and final season of Charmed - portraying a witch called Billie Jenkins (who has continued to appear in the comic book continuations). But after Charmed it was her next role that would really cement her fame.

A sitcom about a group of nerds saw Kaley starring as the Girl Next Door called The Big Bang Theory proved to be a smash hit and catapulted all its cast members to stardom - Kaley included. When she's not on The Big Bang Theory she's a regular on commercials for Priceline.com, portraying the daughter of William Shatner. Her role on The Flight Attendant, as both an executive producer and lead character Cassie Bowden has garnered her new attention, including both a Golden Globe and Screen Actor's Guild award nominations.