Film / The Man Who Saw Tomorrow 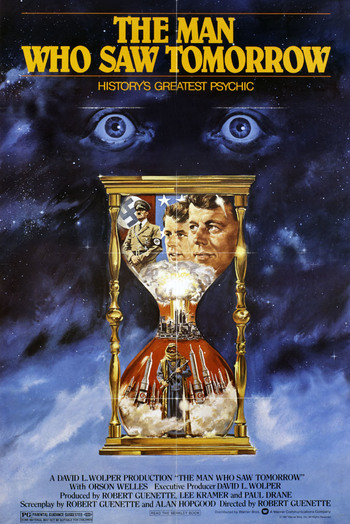 The Man Who Saw Tomorrow is a 1981 Speculative Documentary about Nostradamus, in which we learn that he predicted everything accurately up to 1981, but then he started getting everything wrong for some reason. Either that or this film is guilty of the Sharpshooter Fallacy. It was hosted by Orson Welles, who would later disown it. It's based on a 1973 book of the same name.

The film starts off by recounting the life and times of Nostradamus, mixing in some bits of folklore about him. It then tells us about his supposed predictions of The French Revolution, The Napoleonic Wars, the abdication of Edward VIII, The American Revolution, the presidency of Abraham Lincoln, the two Kennedy assassinations, the Chappaquiddick incident, the Spanish Civil War, Louis Pasteur, hot air balloons, airplanes, space travel, submarines, Nazi Germany, The Holocaust, World War II, the Statue of Liberty, Nuclear Weapons, and the Iranian Revolution. And yes, this is the very non-chronological order in which they are covered by the film.

But you're here for the wacky "future" predictions, aren't you? Of course you are. For the 1980s, Nostradamus is said to predict horrible disasters like droughts, famines, earthquakes, and Ted Kennedy becoming president. The 1990s will see a Middle Eastern warlord launch World War III, which will last twenty-seven years and include the nuking of New York City. Ultimately, the United States and Soviet Union will join forces to defeat this warlord, ushering in a thousand years of peace. And then the world will end in the year 3797, although they leave open the possibility that humanity will survive by colonizing other worlds by then.

In 1991, NBC aired a shortened, reedited version of this film, with Charlton Heston replacing Welles as host. This version corrected or eliminated predictions that had turned out to be inaccurate by that time. It also suggested that the mysterious Middle Eastern warlord might be Saddam Hussein.