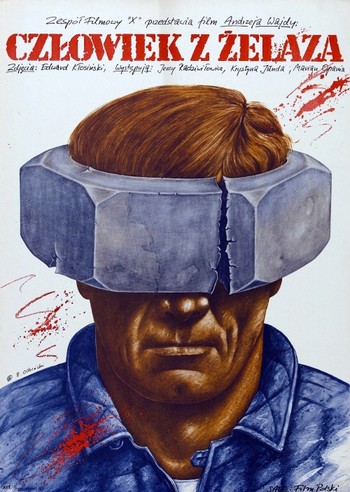 Man of Iron is a 1981 film from Poland, directed by Andrzej Wajda. Its original title is Człowiek z żelaza.

It is a sequel to Wajda's 1976 film Man of Marble. That film told the story of Mateusz Birkut (Jerzy Radziwiłowicz), a campaigner for worker's rights who had once been a hero of Communist Poland but had become an Un-person due to his activism and clashes with the government. It ended with Birkit's son Maciej Tomczyk (also played by Jerzy Radziwiłowicz) telling documentarian Agnieszka (Krystyna Janda) that his father had been dead for years.

Man of Iron picks up the story of the son, Tomczyk (Jerzy Radziwiłowicz). It is 1980, and Tomczyk is a leader of the Solidarity trade union

. Solidarity has risen up and gone on strike, shutting down the Lenin Shipyard

, crucial to the Polish economy. The Communist government wishes to crush Solidarity but also wants to avoid the violence and death caused by government repression of the protest movements of 1970 and 1976. So they recruit Winkel, a producer for Polish radio, and give him a mission. Winkel is to infiltrate the Solidarity movement by pretending to make an admiring documentary on Tomczyk. His real goal is to dig up dirt on Tomczyk that the government will use to discredit him and, by proxy, discredit the Solidarity movement. He interviews many key people in Tomczyk's life, including Agnieszka—now Tomczyk's wife (Krystyna Janda reprises her role as well).

in which the government legalized Solidarity, and the December 1981 crackdown

in which the authorities imposed martial law on Poland and banned Solidarity again.

Not, repeat, not a superhero movie.