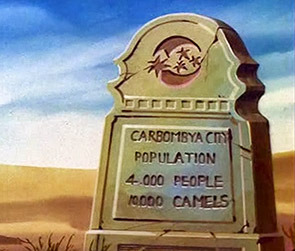 "I swear by this camel I am jockeying, you will find no stereotypes in Carbombya!"
"The rich history of the Middle East is well-documented, so there is little that authors need to add by way of discouraging you from visiting there."
— America (The Book)
Advertisement:

A Fictional Country in North Africa, the Middle East, or South or Central Asia, typically Arab, Turkic, or Indo-Iranian, named for the fictional country that causes so much trouble in The DCU. There are three (often overlapping) versions:

The modern Arabian Nights version tends to be ruled by a gobsmackingly rich Sultan and/or Sheikh, with his doe-eyed concubines to be put at the disposal of the Honoured Effendi. Oil is compulsory. Often a Crapsaccharine World that still uses beheadings, hangings and stonings for minor crimes despite the facade of a Shining City with Crystal Spires and Togas (in other words, a kind of Middle Eastern Brunei). Prototypes are Saudi Arabia, the United Arab Emirates (especially Dubai), and other oil-rich areas in the Arabian Peninsula, along with the Maldives and pre-revolutionary Iran.

Another version has a Tin-Pot Dictator whose pretentious title is inversely proportional to the size of his domain. His ragtag army and air force will probably be equipped with rusting Soviet surplus and manned by luckless conscripts, a few of which may be genuinely crazy. Oil is optional, America-hating terrorists are a must. It is usually located in North Africa or the Middle East, with Saddam-era Iraq, Gaddafi-era Libya, post-Ottoman Egypt and contemporary Syria as prototypes. It may also be a Muslim-majority region of South Asia (Soviet invasion-era Afghanistan, contemporary Pakistan, and Bangladesh when it was under the control of Pakistan as East Pakistan being prototypes) or former Soviet territory in Central Asia (Turkmenistan appears to be the prototype here, with its now-deceased batshit insane dictator Saparmurat "Turkmenbashi" Niyazov

The third version is a Jihadistan ruled by a junta of religious fanatics, imams, ayatollahs and mullahs. You are likely to see only men in the streets, with women either being locked in their homes or wearing black burqas and escorted by men. An overall sense of squalor and apathy prevails, interrupted by occasional flag burnings, beheadings and stonings. Oil optional. Prototypes are Afghanistan under the Taliban, Gaza under Hamas, the former Soviet republic of Tajikistan during its civil war, Islamic State-occupied territory, the Tribal Zone in Pakistan, the disputed region of Kashmir on the border between Pakistan and India, and Bangladesh during its Liberation War. Iran's current regime appears to be a mix of types 2 (especially when a creator wants to play up their enmity with Western countries like The United States) and 3 (especially when a creator wants to play up their theocratic elements), though as mentioned above, it leaned toward type 1 before the shah was overthrown. The leader of this Jihadistan is likely an Expy of Ayatollah Khomeini or Osama Bin Laden, who both were the faces of Islamic fundamentalism in the West for decades.

, heat, sand, and camels. And a lot of big-bearded Church Militants (or Mosque Militants in this case, and either for or against the ruling regime) wielding AK47s, shouting "Jihad!" or "Allahu Akbar!" and blowing themselves up for 72 virgins. Oh, and oil. And you can marry up to four wives if you're a guy. And no queer people allowed there. If you don't like Kebab or Hummus, you'd better bring your own food. Ironically, do not expect to hear Arab Beoble Talk—that trope is almost unheard of in the West, so people familiar with it generally provide a more faithful depiction of Muslim countries.

Heads up for writers: many countries in the list have the suffix "-stan" in them as an obvious nod to Afghanistan, Pakistan, and the various former Soviet republics ending with that suffix. It's not something to misuse. If you want a Qurac that is explicitly Arab in culture, do not use the suffix. There has never been an Arab country that has "-stan" in it and there will never be one; it's a Persian suffix meaning "land of" and is restricted to the Indo-Iranian

Note that such a country is only Qurac if it's on Earth. Stereotypically Middle Eastern-style countries on other worlds are "Arabian Nights" Days-style Fantasy Counterpart Cultures.

On a side note, Qatar is the only (real) country in the world that has a name starting with "Q" (and furthermore, this is only a Romanization convention). On another note, the phonetic sounding of "Qurac" is identical to the word for "dry" or "arid" in Turkish (spelled: kurak) and Azeri (spelled: quraq). It is also one letter away from a vulgar word for penis in some Slavic languages such as Serbian.