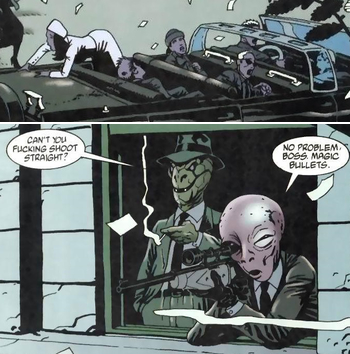 Aliens did it.
"I've got it! Lee Harvey Oswald wanted to steal the Jack Ruby!"
— Homer Simpson, The Simpsons
Advertisement:

Americans love a conspiracy, and one of their single favorite conspiracies is who really killed the 35th President of the United States, John F. Kennedy, in Dallas, Texas on November 22, 1963. As such, if you want to show how a character knows something few others do (or thinks they do), you show that they know something about the Kennedy assassination.

The Kennedy assassination is a very fertile ground for this trope, if only because many Americans can't agree on who did it, why they did it, and how they did it. In fact, although longtime consensus from the Warren Commission Report is that Lee Harvey Oswald did it himself (by sniper shot from the sixth-floor window of the nearby Texas Book Depository), you're more likely to see the characters re-enact one of the most common alternative explanations popular among conspiracy theorists. It helps that there were a lot of different groups angry at Kennedy for one reason or another, including communists, anti-communists, and The Mafia (or an outlandish theory like the FBI, Nazi sleeper agents, Richard Nixon, or even Lyndon Johnson, suggesting a Klingon Promotion), and that Oswald was himself murdered two days later, while in police custody, without admitting responsibility, explaining why he did it, or even saying whether Kennedy was the intended victim.

In particular, you can expect to see explanations for:

There are two strains of this trope. The first is just mere discussion of the event, showing that a particular character is a Conspiracy Theorist (or making fun of people who believe in a conspiracy). The second is where the fictional characters turn out to be responsible, often explaining the inconsistencies in the common conspiracy theories through Time Travel or alien technology. In fact, causing or preventing the Kennedy assassination is one of the biggest reasons fictional people go time traveling (the first being to assassinate Hitler). Naturally, this can get really weird really quickly, which is why this is often Played for Laughs.

As part of the group's challenge to make offensive bowling animations, one of their creations depicts JFK, as a bowling pin, being shot by a bowling ball.

As part of the group's challenge to make offensive bowling animations, one of their creations depicts JFK, as a bowling pin, being shot by a bowling ball.