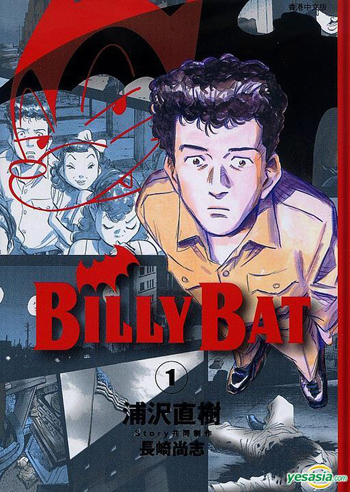 "Do you want to be this country's hero?"
Advertisement:

Billy Bat is a seinen thriller manga written by Naoki Urasawa and Takashi Nagasaki, with the former providing the artwork. It was serialized in Morning from 2008 to 2016.

Kevin Yamagata was born to Japanese immigrants in California in the 1920s, and during World War II he worked with allied forces in Japan as an interpreter. After the war he became a comic book writer, and by 1949 his series Billy Bat, about a private detective in a world populated by animals, is a huge hit whose popularity rivals the biggest titles of DC Comics. His comfortable life comes crashing down when the police use his apartment for a stakeout, and one of them notes that his work is very similar to a Japanese manga. Kevin is horrified that he may have subconsciously plagiarized a work he saw while in Japan, and promptly stops work on the comic to go back and investigate.

Post-war Japan isn't the easiest place to conduct his search, with soldiers everywhere and many locals forced into poverty. To get anywhere he has to sign back up with the American forces and wear a uniform, which naturally makes people less likely to talk to him. However, these are the least of his problems when he tracks down the source of the Billy Bat image, and learns that it's the calling card of an Ancient Conspiracy who aren't very happy that he's been poking around about them.

After that, the story really takes off as it careens around time to show how the Billy Bat image has influenced events throughout history. There's clearly far more going on here than just the conspiracy, but in Urasawa's typical style whatever it all may mean remains incredibly murky.