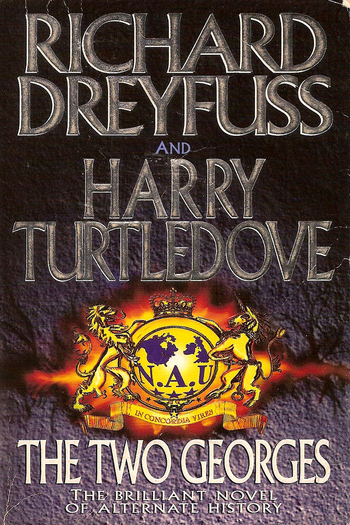 A 1995 Alternate History novel by Harry Turtledove and Richard Dreyfuss (the actor), set in a world where a peaceful resolution was found to what in our world would become the American War of Independence. Essentially, the result was that the American colonies never left the dominion of the British Empire, later fusing together with Canada and the rest of what-would-have-been the United States to form the North American Union.
Advertisement:

In this world, the titular "Two Georges" is a painting by Thomas Gainsborough commemorating the meeting between George Washington and King George III which ensured this peaceful resolution, and has come to be a potent symbol of unity between the United Kingdom and the North American Union. Which makes it a bit unfortunate when the "Sons of Liberty", a terrorist organisation demanding the separation of all ties between the UK and the NAU, manage to steal it. It's up to Colonel Thomas Bushell, the police officer in charge of protecting the painting, to recover it before it is destroyed — and in doing so, to expose and thwart their true plans.

The Two Georges contains examples of: