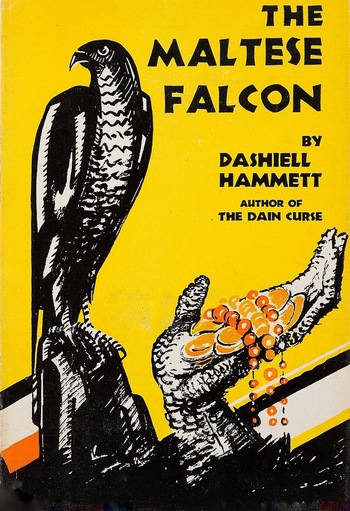 "He wasn't sorry for what he had done. It seemed reasonable enough to him. I don't think he even knew he had settled back naturally into the same groove... But that's the part of it I always liked. He adjusted himself to beams falling, and then no more of them fell, and he adjusted himself to them not falling."
— Sam Spade
Advertisement:

The Maltese Falcon, Dashiell Hammett's third novel, introduced the world to prototypical private eye Sam Spade, and is perhaps his single most famous work, though many people know it only via the 1941 film version starring Humphrey Bogart, which is one of the defining examples of Film Noir.

The story concerns a private detective's dealings with three unscrupulous adventurers who compete to obtain a fabulous jewel-encrusted statuette of a falcon.

The novel was adapted for film twice before the famous 1941 version. A pre-Hays Code version, also titled The Maltese Falcon, was released in 1931 starring Ricardo Cortez. It was far less ambiguous about Joel Cairo than the later films. It also suffered from a decidedly Out of Character portrayal of Sam Spade as The Dandy. The novel was adapted again in 1936 under the title Satan Met a Lady; this version also changed Sam Spade's name, to "Ted Shane", and featured Bette Davis in the femme fatale role.

The Maltese Falcon provides examples of:

When a man's partner is killed he's supposed to do something about it. It doesn't make any difference what you thought of him. He was your partner and you're supposed to do something about it.... I'm a detective and expecting me to run criminals down and then let them go free is like asking a dog to catch a rabbit and let it go. It can be done, all right, and sometimes it is done, but it's not the natural thing.