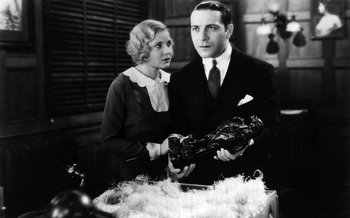 The Maltese Falcon is a 1931 film directed by Roy Del Ruth, starring Ricardo Cortez and Bebe Daniels. It was the first of three film adaptations of the 1929 novel of the same name by Dashiell Hammett.

Sam Spade (Cortez) is a private investigator in San Francisco, half of the detective firm of Spade and Archer. He's an incorrigible ladies' man, with his partner Archer's wife Ida just one of his many girlfriends. Archer knows about the affair Spade is having with Archer's wife.

Simultaneously, the very attractive Ruth Wonderly (Daniels) comes to the office to enlist Spade and Archer in tracking down her sister, who has run away with one Floyd Thursby. Spade and Archer are skeptical of this excuse but take Ruth's $200. In short order, both Thursby and Archer are killed. With the police zeroing in on Spade as the likely killer, either of Thursby to avenge Archer, of Archer because of the affair with Ida, or both—Spade has to find the real killers. His situation is further complicated when an odd cast of characters appear, in pursuit of what is also Ruth's real goal: an obscenely valuable bejeweled statue called the Maltese Falcon.

This story would be made again in 1936 as a loose comic adaptation called Satan Met a Lady, starring Bette Davis. It would be remade yet a third time in 1941 as The Maltese Falcon, a film that has gone down in movie history as an iconic example of Film Noir, and one that has pretty much completely Covered Up this version in public memory.

Dwight Frye, better remembered as Renfield in the 1931 Dracula and as a wild-eyed psycho in several other horror films of the era, here appears as Wilmer, the part played by Elisha Cook Jr. in the 1941 film. Una Merkel plays Effie, Sam's secretary.