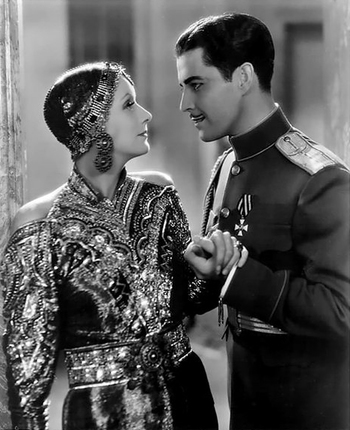 Garbo plays the title role, as the exotic dancer Mata Hari in Paris during World War I, who is also a spy for the Germans. Lionel Barrymore plays General Shubin, a Russian staff officer in Paris who is Mata Hari's lover and has been passing her secret information. Meanwhile, Lt. Rosanoff (Ramon Novarro) has landed in Paris after flying direct from St. Petersburg, carrying dispatches from the Russian government to France. Shubin takes Lt. Rosanoff to see Mata Hari onstage, and Rosanoff is instantly smitten. Mata Hari then gets to know Rosanoff, in order to steal a copy of the dispatches that he is set to take back to Russia from France—but she winds up falling in love with him.

Mata Hari was one of the biggest hits of Garbo's career. It was one of the last big roles for Novarro, who had been a big star in the silent movie days but whose career went into decline in the early '30s, probably because of his thick Mexican accent.