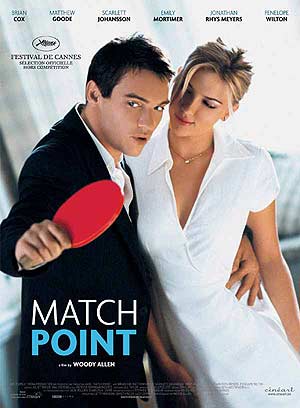 Match Point: when Ping Pong turns nasty.
"The man who said 'I'd rather be lucky than good' saw deeply into life. People are afraid to face how great a part of life is dependent on luck. It's scary to think so much is out of one's control. There are moments in a match when the ball hits the top of the net, and for a split second, it can either go forward or fall back. With a little luck, it goes forward, and you win. Or maybe it doesn't, and you lose."
— Chris Wilton
Advertisement:

Match Point is a 2005 drama, written and directed by Woody Allen, and starring Jonathan Rhys Meyers and Scarlett Johansson, as well as Emily Mortimer, Brian Cox, and Matthew Goode.

Set in London, it follows Chris Wilton (Rhys Meyers), a young Irish tennis player who takes a job working at a club for the upper class. He quickly befriends Tom Hewett (Goode), and is introduced into their family, which includes his sister Chloe (Mortimer), who quickly takes a liking to Chris. The family patriarch gives Chris an entry point into the business world as his relationship with Chloe progresses, and everything looks great for Chris... until he meets Tom's fiancee Nola Rice (Johansson), a struggling American actress to whom he finds himself irresistibly attracted. Complications ensue.

A quasi-remake of Allen's own 1989 film Crimes and Misdemeanors, Match Point ended a string of creative and financial disappointments for Allen that had lasted for the better part of a decade, and ushered in a new period in his filmography, with all but one of his subsequent movies set in Europe (as opposed to his previously famous devotion to New York, New York), and using younger, sexier casts than had previously been the general rule (marking the first of three collaborations between Allen and Johansson). It was both a critical success (earning Allen his first Academy Award nomination since 1997) and a huge box office hit, with a worldwide gross of over $85 million, nearly six times its budget, and one of Allen's best-performing films ever (even adjusted for inflation).

Allen ranks the film as one of the six best of his career (he regards the vast majority of his work to be failures).