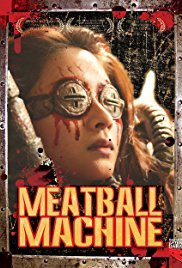 Yoji and Sachiko are coworkers and lovebirds. Their romance is going well, until she's attacked by a creature. These monsters, called NecroBorgs, implant themselves on people as tumor-like growths, eventually taking over their bodies completely and turning them into monstrosities that exist solely to fight and kill each other. Sachiko is turned, so Yoji, having been infected by a different NecroBorg undertakes an effort to rescue his lady love.

A sequel, Meatball Machine Kodoku, was released in 2017.

open/close all folders
Both movies
The first movie
Kodoku
Advertisement: