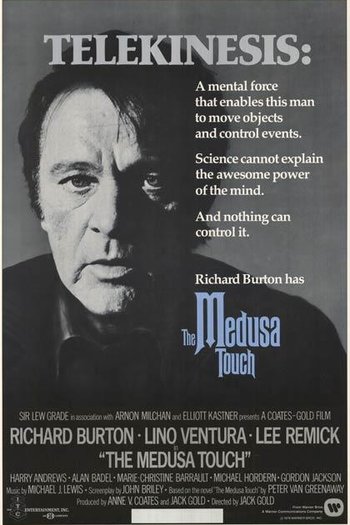 The Medusa Touch is a 1978 horror/thriller film based on a book of the same name by Peter Van Greenaway. It features Richard Burton as John Morlar, a man who believes his life has been surrounded catastrophes of his own making; individuals he has become angered with suffer fatal accidents. Not only this, but he claims to be the cause of a number of larger scale disasters such as plane crashes.

The film begins with Morlar's bludgeoning by an unseen assailant, and after he is initially pronounced dead, he is soon rushed to hospital after showing slight signs of life. Whilst Fish out of Water detective Brunel (Lino Ventura) investigates the attempted murder, Morlar's story is told in flashback through conversations with his former psychiatrist Dr. Zonfeld (Lee Remick).