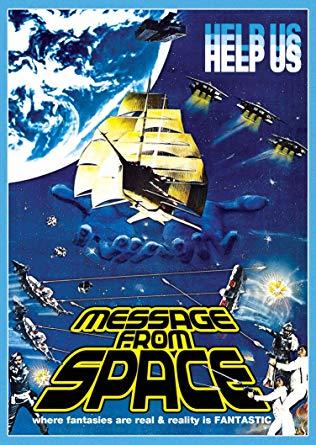 Message from Space note Original Japanese Title: Uchu Kara No Messeji is a film by Kinji Fukasaku, who would eventually do the film version of Battle Royale. A futuristic reimagining of the 19th-century novel Nansō Satomi Hakkenden, it was released in 1978 as Japan's answer to Star Wars. Among the film's stars were Sonny Chiba and Vic Morrow.

The peaceful people of the planet Jillucia are under the iron fisted rule of the Gavanas, whose emperor, Rockseia XXII, is himself ruled by his mother (an old crone played by comedian Hideyo Amamoto in drag). Kido, leader of the Jillucians, conducts a ritual to send out eight Liabe Holy Seeds (which look like glowing walnuts) to deep space. He then sends out his granddaughter Emeralida and her bodyguard Urocco to find the "Liabe heroes" that the seeds have chosen, and bring them back to defend the Jillucians and defeat the Gavanas.

Among the ones that the Liabe Seeds have chosen are:

VSDFHB - From 'Author of all your pain'