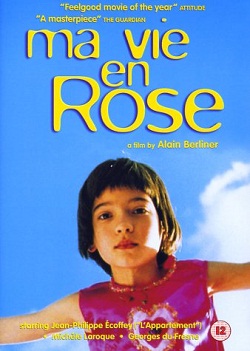 A new family has moved in, and it's time for the block housewarming party to commence. As the party progresses, the children are introduced. First up is the eldest, Tom. Then comes the second eldest, Jean. Then comes the third child, and only daughter, Zoe. And everyone applauds...until it's revealed that the "third child" they thought they saw in the pretty pink dress was actually their youngest, a son named Ludovic.

...Yeah. Life for them becomes more difficult after that. See, Ludovic is not just a Wholesome Crossdresser, she's actually convinced she's really a girl. Even when confronted with irrefutable evidence, she figures it all out: when God was giving out all the chromosomes on the date of her conception, he accidentally lost a set of X chromosomes in the trash, and replaced them with a set of Y chromosomes. And while she's developing a sort-of crush on her new friend Jerome, the rest of the town is getting bent out of shape over whether or not they should let their kids hang around with a boy who habitually dresses in girl's clothes.

Comparable to the later Tomboy. Not to be confused with La Vie en Rose.