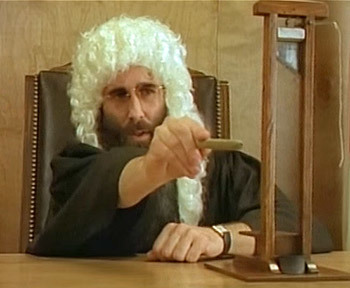 There's a reason why people don't want to hang around him.
"There is no such thing as a plea of innocence in my court. A plea of innocence is guilty of wasting my time. Guilty!"
— Inquisitor Lord Fyodor Karamazov, Warhammer 40,000
Advertisement:

A Hanging Judge is a ruthless judge who rules his courtroom with an iron fist as his own personal fiefdom. He will hand out brutal sentences for the most minor infractions. He may be corrupt and using the law for his own ends, a Corrupt Hick using his power to dominate the local community, a Knight Templar who believes his punishments are justified, or a bully who gets off on abusing his power. Any hero who ends up hauled before him can expect no mercy and precious little justice, especially if this guy happens to hate them—impartiality is anything but guaranteed with a judge of this kind. You better have an Amoral Attorney at your side when you confront the Hanging Judge in the courtroom, or it's guaranteed that you won't walk out a free bird after the trial. The canonical alignment for this guy is Lawful Evil.

While the moniker does explicitly refer to judges who in particular tend to sentence defendants to hang, it has since broadened to include any overly harsh sentencing patterns.

May be a Stern Old Judge. This character typically presides over a Kangaroo Court, can give Longer Than Life Sentences, and may have a Guilty Until Someone Else Is Guilty viewpoint. See also the equally-bad Joker Jury. If he leaves his courtroom and actively pursues criminals as well, there's overlap with Judge, Jury, and Executioner. For another courtroom villain, see Amoral Attorney.