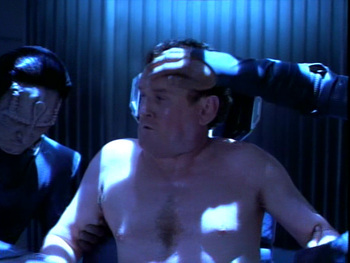 "Now tell us, Mr. O'Brien: how many lights do you see?"
Advertisement:

It's time for O'Brien to go on vacation for the first time in five years, and he's having trouble putting aside his duties. Just before leaving, he bumps into Raymond Boone, an old comrade of his from the Rutledge. After a brief chat, O'Brien promises to catch up with him next month. But once O'Brien and Keiko are off the station, Boone sneaks into some secure location bearing a recording of O'Brien's voice.

On the happy couple's runabout, Keiko finally manages to peel O'Brien away from his work for a romantic encounter when a Cardassian ship approaches and forcibly boards them. O'Brien is arrested and hauled back to Cardassia Prime, where they remove his tooth for their record and offer him the chance to confess to his crime. Through all of this, the Cardassians have staunchly refused to tell him what he has been accused of. It will be revealed during his trial in two days.

Back on Deep Space Nine, Sisko informs Keiko that several Federation ships have been deployed to the demilitarized zone to pressure Cardassia over O'Brien's capture. They are contacted by Makbar, the Archon who will be overseeing O'Brien's trial. She explains that O'Brien's charges will be announced at the start of the trial, as is customary in Cardassian jurisprudence, and in the meantime there is no need to prepare — his guilt has already been decided. The "trial" will occur solely to explain how his guilt was reached. As his spouse, Keiko has the right to attend the trial. Odo, who had been made an officer of the court during the Occupation, is also granted permission to attend the trial as O'Brien's advisor.

O'Brien meets his "attorney," Conservator Kovat, who explains that O'Brien's trial and sentence help reinforce order and peace on Cardassia. Seeing a guilty man get caught and punished will make the people feel safe in knowing a criminal has faced justice. Kovat's role is to try and coax a confession from O'Brien, not to prove his innocence.

On DS9, Sisko and Kira find two dozen photon torpedoes missing from weapons storage. The voice print to access it is O'Brien's, and it is possible a that a transporter expert could have swapped the crates without the security scanners noticing. Weeks ago, a Maquis ship stole a supply of photon launchers, leading them to wonder if O'Brien's vacation was a cover to sell the torpedoes to the Maquis. Sisko begins an investigation into whether the Maquis were behind the theft while also raising the question of how the Cardassians could have suspected O'Brien was smuggling weapons.

Odo meets with O'Brien and explains the situation to him, but O'Brien maintains his innocence. The trial begins, and it's all as backwards as you'd expect. Makbar announces the verdict at the beginning of the trial, and Kovat does little more than ask various witnesses to explain the evidence against O'Brien. Odo interrupts to present the evidence that O'Brien was framed, but Makbar shuts his effort down. The investigation is over and verdict has already been reached, so she refuses to hear new evidence.

Dax analyzes O'Brien's voice print and realizes it was reconstructed by someone who had recorded O'Brien's voice. The crew identify Raymond Boone's interaction with O'Brien just before the chief left and bring him in for questioning, but he claims to know nothing. In medical, the lights go off, and Bashir is confronted by an unknown member of the Maquis, who claims Boone is not one of them. Sisko and Bashir confront Boone and bring up many ways in which he began to act strangely eight years ago when he was released from a Cardassian detention center. They restrain him, and Bashir conducts a medical examination.

Odo's various interruptions have dragged out O'Brien's trial to historic lengths, but it's just now winding down. O'Brien is called upon to confess, but he refuses. As Makbar prepares to sentence him, Sisko enters with Boone. Seeing them, Makbar suddenly decides there is room for compassion in Cardassia's courts, and O'Brien's verdict is set aside. He's a free man.

Back on DS9, the crew explain that Boone was a Cardassian, identified as such by the fact all Cardassians have a tooth extracted for purposes of identification at age ten. The real Boone apparently died in captivity, and a Cardassian was surgically altered to look like Boone to infiltrate the Federation. They believe this plot was to try to make it seem as though the Maquis were secretly being supplied by the Federation so the Cardassians would have cause to pressure the Federation to leave the demilitarized zone and disband their colonies. With the plot exposed, O'Brien and Keiko can go on their vacation properly this time, Sisko having pulled strings to get them an extension.