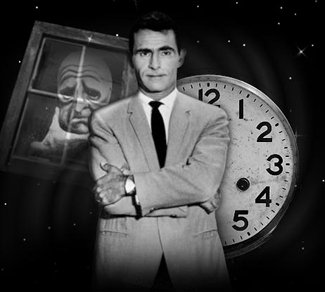 Picture, if you will...
"There is a fifth dimension, beyond that which is known to Man. It is a dimension as vast as space, and as timeless as infinity. It is the middleground between light and shadow, between science and superstition; and it lies between the pit of Man's fears and the summit of his knowledge. This is the dimension of imagination. It is an area which we call...the Twilight Zone."
— Rod Serling, the first Opening Narration
Advertisement:

The Twilight Zone had a rather remarkable ability to take silly story concepts, combine them with preachy, moralistic writing, and produce some truly outstanding episodes. (Seriously, you think The West Wing was heavy-handed? Aaron Sorkin's got nothing on Rod Serling in full righteous-anger mode.) The ghost of Adolf Hitler travels to the United States and teaches Dennis Hopper to become an effective demagogue ("He's Alive")? It works. A former concentration camp commander travels back to Dachau after World War II and is put on trial by the ghosts of his victims ("Deaths-Head Revisited")? It works. William Shatner hams it up and yells about the monster on the wing of the plane ("Nightmare at 20,000 Feet")? It works.

Almost all episodes ended with Aesops; "Beauty is in the eye of the beholder," "Be tolerant," "Democracy is good," etc. Occasionally, you'd get a Hard Truth Aesop; notably, the episode "Time Enough At Last," which starred Burgess Meredith and seemed to tell the viewer, "Even if you are a good and decent man, you can still have horrible things continually happen to you and end up with no hope at all", and became one of the most famous episodes of the original series.

The series became so iconic that it's received a number of reworkings and continuations in various media over the decades, starting with a Comic-Book Adaptation that was launched while it was still in production and outlasted it by several years. Twilight Zone: The Movie, a big-screen version that featured individual segments directed by Steven Spielberg, Joe Dante, John Landis and George Miller was released in 1983. Tragically, the movie is best remembered for a horrible accident in which three actors (including Vic Morrow and two children) were killed during shooting of an action scene in Landis' segment.

An often worthy revival series ran on CBS from 1985–87, and in First-Run Syndication from 1988-89. Another revival ran on UPN in the 2002–03 season, which reunited Bill Mumy and Cloris Leachman in a sequel to the classic TZ chiller "It's a Good Life". A third helmed by Jordan Peele began airing in 2019 on CBS All Access, lasting for two seasons before ending in 2020. A licensed Pinball game, The Twilight Zone, was released in 1992, filled with references and Shout Outs to various episodes, and is today one of the most popular pinball games of all time. However, it's the daring original series that shows every sign of lasting the ages as the literature that it is.

Many television shows have borrowed liberally from The Twilight Zone, especially The Simpsons' Treehouse of Horror, Garfield's Tales of Scary Stuff, and Futurama's "The Scary Door" and "Anthology of Interest". There's also a popular thrill-ride inspired by the series in the Disney Theme Parks, The Twilight Zone Tower of Terror, which inspired its own non-canon TV film in 1997.

Submitted for your approval, multiple tropes, each unique in their very own way... in the Tropelight Zone:

Guess what? Your whole life has been a dream, one of your family members is a robot, and that nice man that just moved into town is a Martian, just like all your neighbors living here with you on Mars, after Earth was destroyed. Except he's also a ghost. Welcome to the Twilight Zone. Hey, look at that weird mirror!
Feedback