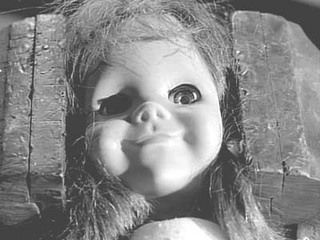 "My name is Talky Tina, and I am going to kill you!"
"The worst fear of all is the fear of the unknown working on you, which you cannot share with others. To me, that's the most nightmarish of the stimuli."
—Rod Serling, interview

With a series as bizarre and disturbing as The Twilight Zone (1959), you bet there's going to be Nightmare Fuel-tastic content. Here is a list of examples:

And When the Sky Was Opened

I Shot an Arrow Into the Air

The Monsters Are Due on Maple Street

A World of Difference

A Nice Place to Visit

Nightmare as a Child

A Stop at Willoughby

Eye of the Beholder

The Lateness of the Hour

A Most Unusual Camera

The Odyssey of Flight 33

Will the Real Martian Please Stand Up?

It's a Good Life

Five Characters in Search of an Exit

I Sing the Body Electric

A Kind of Stopwatch

From Agnes With Love

Spur of the Moment

Queen of the Nile

What's in the Box?

Stopover in a Quiet Town

Come Wander With Me