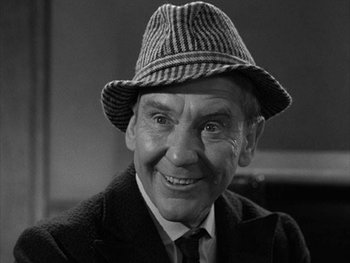 "I was born a character actor. I was never really a leading man type."
Advertisement:

He was a lifetime member of the Actors' Studio by invitation, won several Emmy Awards, was nominated for two Academy Awards, and was the first male actor to win the Saturn Award for Best Supporting Actor twice. His best-known roles are in the Rocky series as Mickey Goldmill, Rocky Balboa's manager, and as The Penguin in the 1960s Batman series.note He was so popular in that role that the producers made a point of having a Penguin script available on file for whenever Meredith was available. He also appeared in four episodes of the original version of The Twilight Zone, including one of the most famous, "Time Enough at Last".