"This is the story of Russia's "Great Patriotic War", and the Red Army's long road from defeat to victory"
— Introduction 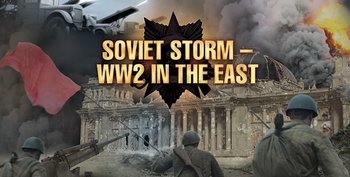 Soviet Storm: World War II in the East (Russian:"Советский Шторм: Вторая мировая война на Востоке"; original Russian title — "Великая война", English: "The Great War") is a 2011 17 (later 18) episode Russian documentary series originally made for Russian television. As the name implies, it covers the Soviet Union during World War II, in particular about their armed forces, and their years-long war against the forces of Nazi Germany during the Great Patriotic War, and later, Imperial Japan during the Soviet Invasion of Manchuria. The series is notable for its use of dozens of War Reenactors combined with Computer-Generated Images to depict tanks, aircraft, and vehicles for most scenes.

, respectively. The English dub can also be found here

, and the series is also available on Amazon Prime.