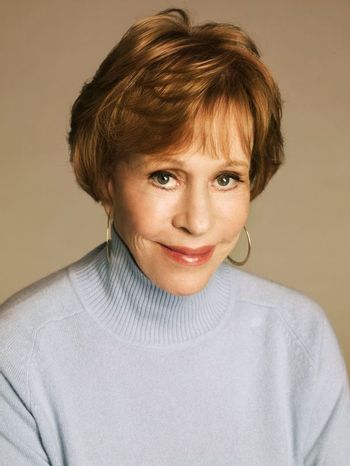 *Ear tug*
"I'm really not that funny in real life. But I am the best audience one could find. I love to laugh."
Advertisement:

Carol Creighton Burnett (born April 26, 1933 in San Antonio, Texas) is an American actress, comedian, singer, voice artist, author, and producer, best known for starring in her eponymous hit variety series from 1967–78, as well as originating the role of Princess Winnifred the Woebegone in the 1959 Broadway production of the musical Once Upon a Mattress.

Her film roles include the villainous Miss Hannigan in the 1982 version of Annie, as well as the voice of the equally villainous Jane Kangaroo in 2008's Horton Hears a Who!.

Burnett has been married three times, and had three daughters with her second husband. (Her oldest, the actress and singer Carrie Hamilton, died of cancer-related pneumonia at the age of 38.)

Tropes related to her career:

"I'm so glad we had this time together
Just to have a laugh or sing a song
Seems we just get started and before you know it
Comes the time we have to say, 'So long.'"