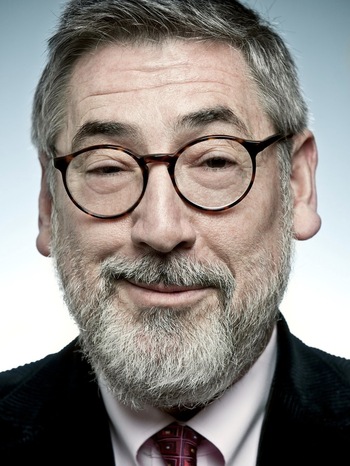 See you next Wednesday.
Advertisement:

He's known for having directed some of the most beloved comedies of the late 1970s and early '80s, including Animal House, The Blues Brothers, Trading Places, Coming to Americanote These last two are implied to take place in a Shared Universe. and ¡Three Amigos!, as well as the horror classic An American Werewolf in London and Michael Jackson's groundbreaking music video for "Thriller." He also developed and produced Clue, the All-Star Cast mystery/comedy based on the popular board game.

More controversially, Landis is known for his reckless direction when filming his segment for Twilight Zone: The Movie, which killed Vic Morrow and two (illegally employed) child actors. Filming late at night and violating child labor laws, he ignored the helicopter pilot's warning against flying low to the ground and close to pyrotechnics, resulting in the helicopter crashing and the three actors getting violently killed in the process. Landis plead guilty to the illegal child labor, but not manslaughter, of which he was acquitted despite all evidence against him; still, the controversy was enough to bring his directing career to a screeching halt.

He is also the father of Max Landis, a sceenwriter and also a director.