Film / An American Werewolf in London 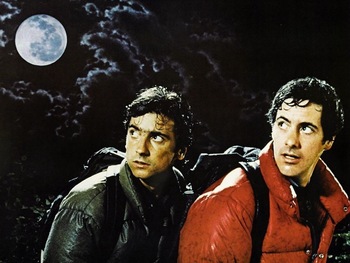 Jack: Did you hear that?
David: I heard that.
Jack: What was it?
David: Could be a lot of things.
Jack: Yeah?
David: A coyote.
Jack: There aren't any coyotes in England!
Advertisement:

On the night of a full moon, two American backpackers named David and Jack make a stop at a pub by the name of the Slaughtered Lamb on their trip through the UK. Forgetting the locals' advice to stay out of the moors, the two are soon attacked by a mysterious animal that kills Jack and wounds David before the locals gun it down. Before passing out, David noticed that the beast seemed to have been replaced with the body of a naked man. Waking up 3 weeks later in a London hospital, David is visited by Jack’s spirit who reveals that the beast who attacked them was a werewolf. He then tells his friend that he is now cursed to become a werewolf himself and warns him to take his life so that the previous wolf's victims can finally find peace in the afterlife… and because the night of the next full moon is only one week away.

An American Werewolf in London is a 1981 Universal comedy/horror film written and directed by John Landis. (It was advertised with the Tagline, "From the director of Animal House, a different sort of animal.") Starring David Naughton, Griffin Dunne, Jenny Agutter, and John Woodvine, the film featured special effects by master make-up artist Rick Baker. (Frank Oz also made a cameo appearance, as did Kermit the Frog and Miss Piggy — not to mention Landis himself.) It was shot on location in the UK, with Wales standing in for the Yorkshire moors, and "The Black Swan" pub in London for "The Slaughtered Lamb." The background music consisted of a number of cannily deployed popular songs (all of which have "moon" in the title), bolstered with some eleven minutes of moodily atmospheric music by Elmer Bernstein.

AWiL has infuriated some Britons, particularly Northerners, with its somewhat cartoonish and stereotypical depictions of life in the UK; it is possible that this was a deliberate echoing on Landis's part of the sketchily-researched versions of Britain found in the Universal Horror cycles of the Thirties and Forties.

In 1997 a sequel, An American Werewolf in Paris, appeared; despite an engaging pair of leads (Tom Everett Scott and Julie Delpy), it was so fundamentally ill-conceived and executed (Landis was barely involved at all) that it was not very well received.

Based largely on this film, Michael Jackson engaged Landis to direct his 1982 "Thriller" music video, and hired Rick Baker to do the make-up effects for it.

There is now a Slaughtered Lamb Pub

in the Greenwich Village section of New York City. Also, in a triumph for Universal Studios, the 2013 Halloween Horror Nights event at the Orlando park successfully got permission to make a haunted house based on the film. It includes virtually every horror-related scene of the film, from the attack on the moors and the demonic Nazi dream to the famous transformation and the wolf's rampage out of the porn theater into Piccadilly Circus. The house was so popular that it was brought over to the Hollywood event the following year, and in 2015 was done at the Orlando event a second time.

A remake of the film is rumored to be in the works.

An American Werewolf in London provides examples of the following tropes: