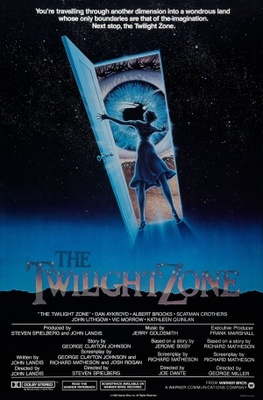 "A dimension of sight..."
"You're travelling through another dimension. A dimension, not only of sight and sound, but of mind. A journey into a wondrous land whose boundaries are that of imagination. Next stop, the Twilight Zone."
Advertisement:

An Anthology Film based on the 1959 Twilight Zone television series, released in 1983. It follows the show's anthology format by presenting four segments (all but one remakes of classic episodes), which are directed by four different directors.

This film became infamous for a ghastly accident that took the life of Vic Morrow and two child actors named My-Ca Dinh Le and Renee Shin-Yi Chen. The script for "Time Out" called for a scene in which Morrow's character is supposed to be carrying two Vietnamese children across a river to safety during an American bombing raid in Vietnam. Director John Landis was shooting late at night, violating child labor laws, and ignoring the helicopter pilot's concerns about flying so close to the ground and so close to explosive detonations. The cameras rolled anyway, and the explosive charges meant to simulate bombs caused the helicopter to crash, crushing one child under its landing skid and causing the rotor to decapitate Morrow and the other child. Landis was later tried and acquitted on charges of involuntary manslaughter. The 2020 documentary series Cursed Films shows the actual, uncensored footage of the incident and its direct aftermath.

The tropes covering the film as a whole: