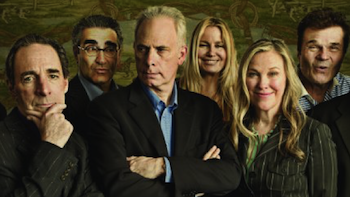 A group of people that, whenever one is involved in a production, others are almost guaranteed to show up at some point.

This used to be a very enforced part of media making. Studios expected artists to specialize into units. An example would be John Ford being specialized in westerns, which meant that large parts of the crew—both in front of and behind the camera—would literally always work together. Another aspect of Hollywood filmmaking which used to enforce this in the past was that studios would often have exclusive contracts with big names spanning several years and movies. For instance, the vast majority of Humphrey Bogart's films after he made it big were for Warner Bros.

See also Those Two Actors and Only So Many Canadian Actors. When each member tends to play the same sort of role every time, they're a Universal-Adaptor Cast. Associated Composer is a subtrope.