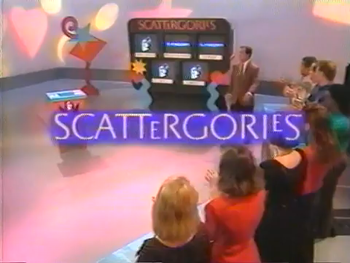 Short-lived 1993 NBC Game Show adaptation of the Board Game, produced by Reg Grundy and hosted by Dick Clark. Two teams of four (men versus women) competed in a game where the five celebrity "panelists" appeared in prerecorded video clips. Clark revealed a category and a letter, and the team in control played through three phases on their turn:

After two rounds, the winning team played for a cash jackpot by giving answers in one category and five different letters, trying not to match at least three celebrities.

The series wasn't that popular, debuting in an era where games were heading out the door. The show ran from January 18-June 11, with a few weeks of repeats during that time.