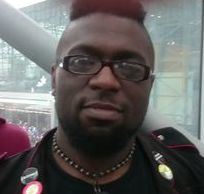 Marcellus Swint (born June 18, 1987) is a voice actor, animator, and artist from Philidelphia, Pennsylvania. Often going by the handle of "The Engineer" on account of his background in machines, Marc is heavily involved in internet circles, having designed the websites for Atop the Fourth Wall and Bennett the Sage as well as participating in a number of abridged series.

Marc is especially prominent on Anime Abandon where he works in scripting, prop building and animating (notably having created the animated intro for the show). Marc and Bennett co-host the Super Toolshed podcast where the pair discusses movies, anime, and other bits of pop culture.

Outside of internet roles, Marc worked on the localization of Street Fighter V and voiced the character Necalli. He's also known for his roles as Kiawe in Pokémon the Series: Sun & Moon and Block Man in Mega Man 11.