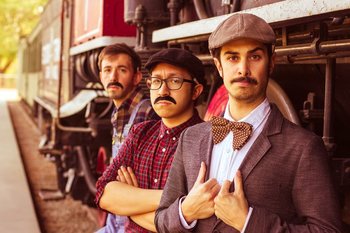 The Tin Can Brothers are a theatre, sketch comedy and Web Video troupe originally based in Chicago, now based in Los Angeles, founded in 2014 by members of Team Starkid Brian Rosenthal, Corey Lubowich and Joey Richter. Their name is an in-joke about how the creators used to live in the same apartment and could communicate by Tin-Can Telephone, with tongue-in-cheek Retraux branding about how they've been performing since 1933.

TCB are known for their many collaborations, both one-off Special Guests and long-term partnerships. They and Team Starkid are Friendly Fandoms, referring to themselves as a Starkid "sister-in-law troupe", sharing much of the same Production Posse, including Starkid company owner Nick Lang himself acting in their most recent production, Wayward Guide For The Untrained Eye. They're also Friendly Fandoms with Shipwrecked Comedy, to the point where they staged a multimedia crossover event as a prank on their fans about the "falling out" between the two troupes, the Bookfarters Saga

, growing into making short-length films and stage shows, and gaining a lot of attention for their debut full-length stage musical Spies Are Forever. Their current flagship work is the multimedia Web Video and Podcast project Wayward Guide For The Untrained Eye, which is a bit of a Massive Multiplayer Crossover of performers from the whole history of Team Starkid, Shipwrecked Comedy and Tin Can Bros themselves.

The Tin Can Brothers' work includes:

The Tin Can Brothers and their work contain examples of: