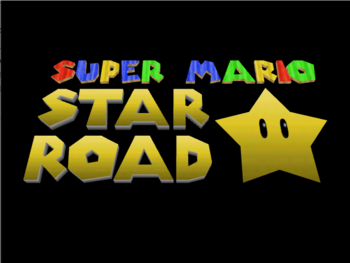 The game begins with Yoshi briefing Mario on the situation: Bowser has learned how to enter the realm of the Star Spirits, and thus has access to a multitude of Star Road portals that lead all over the Mushroom Kingdom. He's using the portals to transport his troops and cause chaos. Mario must stop him by accessing the Star Road himself, but he can only do so at Star-Leap Tower—and Bowser's sealed it off. To reach it, Mario must collect Power Stars to open sealed doors.

Currently Skelux is working on an Updated Re-release for the DS, called Super Mario Star World. It is set to feature radically revamped levels, improved gameplay, and up to 10 completely new areas. Additionally, a sequel, entitled Star Road 2, is in production. This game will have 240 Stars, 40+ levels, and original music.

Additonally, there is another version of this game called Super Luigi Star Road. Made by Quasmok, with permission from Skelux, the hack replaces Mario with Luigi, complete with new model, voice clips, and his moveset.