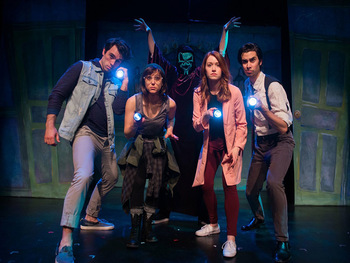 "Keith, Gwen, Scrags, Esther! Good, better, best, bester! Who are we? THE SOLVE-IT SQUAD!"
And I'd have gotten away with it too, if it weren't for you meddlesome hooligans!
Advertisement:

The Solve-It Squad Returns! is the second full-length narrative stage production by sketch comedy troupe The Tin Can Brothers (Joey Richter, Corey Lubowich and Brian Rosenthal), following their initial success with Spies Are Forever in 2016. Unlike its predecessor (and the Team Starkid shows where the members of Tin Can Brothers got their start), it's a somewhat stripped-down production, a one-act straight play with an Opening Chorus Theme Tune and a Sudden Musical Ending, rather than a true musical, with a Minimalist Cast of only five actors: Joey Richter as Scrags, Ashley Clements (star of The Lizzie Bennet Diaries) as Gwen, Gabe Greenspan (the creator of Pokémon: The Mew-sical, who played Gary Oak) as Keith, Lauren Lopez as Esther, and Brian Rosenthal as "Everyone Else".

The show is about a suspiciously familiar gang of four young teens with a talking dog whose crime-fighting career is derailed by the unexpected violent murder of their Team Pet Cluebert, sending the four of them into a downward spiral over the course of the next twenty years. Now, in the present day, one of them finds a lead on Cluebert's killer and sets out to put the band back together to finally bring him to justice. Can the Solve-It Squad overcome their long-buried resentments and dysfunctions and come back together as a team to put their demons to rest?

The Solve-It Squad Returns! originally ran from June 15-25 at the Secret Rose Theatre in North Hollywood, CA, and reunited for an off-Broadway run a year later from April 26-May 12, 2018 at the TBG Theatre in New York. You can watch it on YouTube here

The Solve-It Squad: Back in Biz, a sequel in the form of Zoom script readings of four episodes of an imaginary animated series, with digital tickets available