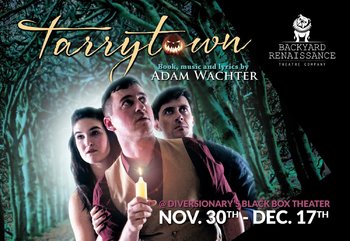 Promotional poster for the 2017 staged production.

Tarrytown is a 2017 musical written by Adam Watcher. The musical is loosely based on The Legend of Sleepy Hollow, and is set in a modern time. The musical follows Ichabod, a teacher from New York City who moves upstate to a small town, Tarrytown. There, he meets the principals' assistant, Katrina, and her husband, Brom. The three both inwardly and outwardly discuss the relationships between the three of them, and their wishes to break out of the small-town life.

Tarrytown was first staged in 2017, starring Tom Zohar, Marian Mc Nellen, and Bryan Banville. In 2018, a reading was performed, starring Andy Mientus, Krysta Rodriguez, and Jeremy Jordan. The three also were featured in the 2020 concept album.