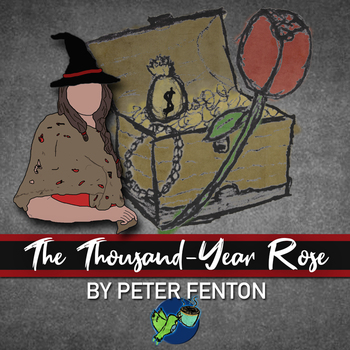 KIMMI: Have you heard of Hanenbough? It's in Ireland.
When the gales thrash the ocean
And the rolling thunder leers–
E’en so, a garden grows in the cave
While the rose waits a thousand years.
Advertisement:

The Thousand-Year Rose is an adventure comedy play by Peter Fenton that had its world premiere in 2016 at Wheaton College in Wheaton, Illinois, where Fenton was a senior. The premiere production, directed by Fenton, starred Piper Curda as Kimmi Larkin and just a few years later was picked up and distributed by Heuer Publishing in 2019. This play is a woman-centric comedy exploring the nature of good and evil in an adventure inspired by Paper Mario: The Thousand-Year Door.

Once upon a time, the city of Hanenbough, Ireland was beautiful and wealthy but it was overrun by thieves and vandals. One mysterious person was said to have gathered all the riches they could find and buried it in a cave, sealed by a rose that will only bloom in a thousand years for somebody with a pure heart. A thousand years later, three witches (Abigail, Ciera, and Vivian) are trying to get this treasure and they decide the only way to get the treasure is to kidnap somebody with a pure heart.

The sassy and kind-hearted Kimmi Larkin arrives in Hanenbough from America as a summer research intern for her archaeology professor. After the Professor abruptly falls in love with a local widow, Kimmi teams up with the widow's fourteen-year-old grandson, Scott Foley, to search for the treasure. The witches notice Kimmi and watch her befriending nearly everyone she meets (namely, a headline actress, a kooky sailor, and a social pariah) and believe her to have a pure heart. Thus begins a play with the witches chasing Kimmi and Kimmi and her friends following the legend of the Thousand Year Rose.

The Thousand-Year Rose contains examples of:

open/close all folders
Tropes A-M
CIERA: But… I have a pure heart, don’t I?
ABIGAIL: We’re witches, Ciera. Do I really need to answer that question?
PAREZCO: I am the master of impressions!! I am… Parezco!
Tropes N-Z
ABIGAIL: He’ll wake up to know that both the treasure - and his intern - are gone forever.
KIMMI: Right, I forgot. You’re going to kill me.