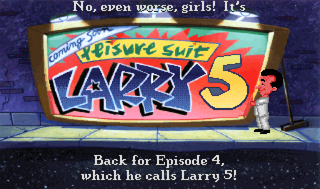 An ongoing series skips an installment number (usually deliberately). Events from the missing installment may be referred to as if they had actually happened; there may even be an assurance that it was the highlight of the series.

Reasons for doing this include:

When the non-existent episode is treated by subsequent episodes as if it existed, related to Secondhand Storytelling and perhaps to Noodle Incident.

A related trick is to bring out a new work that claims to have been made years ago and then shelved or forgotten; we don't seem to have a trope page for that, but Garth Marenghis Darkplace is an example, and it's related to Retraux and Direct Line to the Author.

When there's supposedly an entire series of non-existent episodes preceding the first that actually exists, it's Retroactive Legacy.

See also Oddly Named Sequel 2: Electric Boogaloo, where a sequel might be given a strange numbering (such as The Naked Gun 33⅓ or Halloween H20) without meaning to imply a missing installment; and Unusual Chapter Numbers. Also Stopped Numbering Sequels which may predate Un Installment.

If the creator maintains an air of mystery around the missing installment, this trope may give rise to Pop Culture Urban Legends.

Not to be confused with Canon Discontinuity.

Examples where the unmade installment was later made