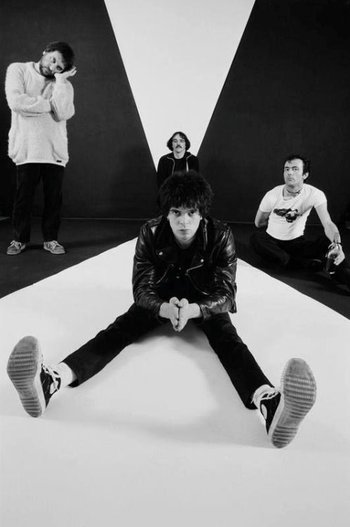 The Stranglers are an English Punk Rock band, best known as one of the first wave of British Punk bands in The '70s.

The band began several years before the Punk explosion in Britain, originating from prepunk Blues, Jazz and Psychedelic Rock backgrounds; their sound was much more technically skilled and literate than their contemporaries, and they were one of the few Punk bands to make liberal use of keyboards. They also had what one music critic described as a Monty Python-esque sense of absurdity, which appeared to everyone else as abject sexism and racism. Regardless, they managed a loyal following and plenty of chart-success, while having a shaky relationship with the music press.

Their sound changed over the years, becoming more experimental, then more pop accessible, and right back to a classic-era revival. Their classic lineup included Hugh Cornwell on guitar, Jean-Jacques Burnel on bass, Dave Greenfield on keyboards, and Jet Black on drums. Cornwell was the main singer, though Burnel takes the lead vocals on many of their songs. Cornwell left the band in 1990, being briefly replaced by John Ellis from The Vibrators before current guitarist Baz Warne settled in during 2000.

In 2020, Dave Greenfield sadly died of COVID-19, and in response to this the band announced they would be releasing the final album they had been working on with Greenfield and go on a final tour in late 2020 before splitting up.