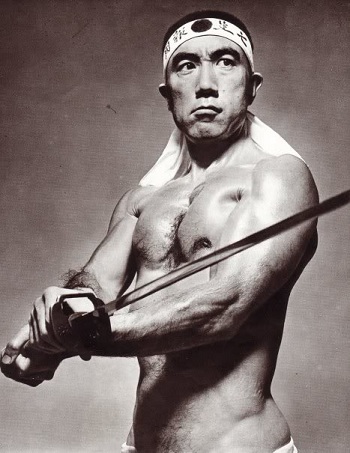 Yukio Mishima (三島 由紀夫, Mishima Yukio, real name 平岡 公威, Hiraoka Kimitake, January 14, 1925 – November 25, 1970) was one of the greats of post-war Japanese literature. A Manly Gay given to bodybuilding and Samurai worship, he was part of, and contributed to, the persistent undercurrent of traditionalist right-wing nationalism that persisted after the Japanese defeat in 1945, longing for the days of genuine Imperial rule and a strong Japanese military. Mishima also spoke Surprisingly Good English so much that he was able to do a famous Time Magazine interview in 1969 without an interpreter.

One of his dear friends was Shintaro Ishihara, future governor of Tokyo, who would later write the book on Japanese neo-nationalism, The Japan That Can Say No.

Perhaps unsurprisingly, his traditional aesthetics root from his descent from both the main house of Tokugawa Ieyasu and one of his retainers. Despite the vicissitudes of the Meiji Restoration, his side of the family never really turned Impoverished Patrician (having married into Self-Made Man relatives too). However, his father and grandmother were very authoritarian in their upbringing—with his own artistic expression unsupported (for the usual Starving Artist-related fears). His mother, on the other hand, was very much his first fan and even helped keep his efforts from his father until he met renown. Also, a girl he once went out with via an arranged date was Michiko Shouda... the future Empress Michiko of Japan.

Despite being mentioned as a potential nominee for the Nobel Prize in Literature even before his fortieth birthday, he is more famous for his ill-advised attempt to incite a pro-Imperial coup against the government of Japan at a JSDF base in 1970, at the end of which he and his Number Two Masakatsu Morita committed Seppuku.

It should be noted that, technically speaking, Mishima's intended "coup" was nonsense. By 1970, no popular movement had any pretension of overthrowing the government to resurrect a World War II-era order. The American equivalent of this would be if someone addressed a random group of soldiers and announced they needed to overthrow the illegitimate government in Washington so they could properly return to their rightful position as subjects of the British Crown. It's very likely he knew this and it was merely a spectacle to preface his long-planned suicide.

Mishima recieved several Shout Outs after his death. The first might have been The Stranglers' 1978 song "Do You Wanna - Death and Night and Blood (Yukio)", whose title was taken from a line in Confessions of a Mask.

In 1983, Ryuichi Sakamoto of Yellow Magic Orchestra fame would collaborate with British musician David Sylvian to create the song "Forbidden Colours", named after Mishima's novel of the same name. Based on Sakamoto's theme for the film Merry Christmas, Mr. Lawrence, in which he starred and did the soundtrack for, the song connects the film's central plotline about the gay tension between a WWII-era Japanese officer and one of his prisoners with Mishima's own homosexuality and the novel's discussion of it.

In 1985, Paul Schrader (most famous for writing Taxi Driver) co-wrote and directed a movie based on Mishima's life, appropriately called Mishima A Life In Four Chapters. The film earned critical accolades, despite completely tanking financially, though that's not entirely unexpected when one considers how famous Yukio Mishima is in Schrader's native America, and the fact that the film is IN Japanese, with subtitles.

As a final interesting note, Mishima himself made a short, silent film called Patriotism in 1966, in which he plays the main character: a disgraced military officer. He also played the role of historical assassin Tanaka Shinbei in Hideo Gosha's 1969 film Hitokiri

. In a possible case of Harsher in Hindsight or deliberate Foreshadowing on his part, he committed seppuku in both of those films as well.