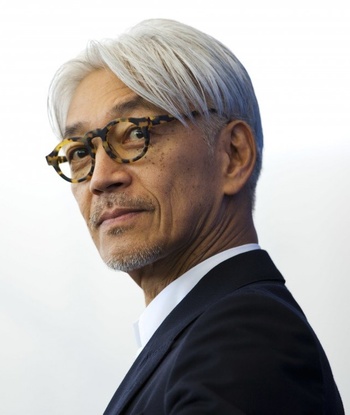 Ryuichi Sakamoto (坂本 龍一 Sakamoto Ryūichi, born January 17, 1952 in Tokyo) is a prolific Japanese composer, singer, songwriter and record producer, and an anti-nuclear activist. He's also had some acting roles, and wrote some anime and video games in addition to soundtracks.

He graduated from Tokyo National University's Fine Arts & Music program with a M.A. in music composition with special emphasis on electronic and ethnic music, which would define a good chunk of his musical career. He has pursued a diverse range of styles both solo and, famously, as a member of Yellow Magic Orchestra. He also collaborated with former Japan frontman David Sylvian extensively in his early solo career. Alongside YMO, Sakamoto is considered a major influence on western electro, techno, and Hip-Hop artists, with analysts labeling his 1980 song "Riot in Lagos" the Trope Maker for electro.

Acting-wise, his best known roles are without much doubt the World War II-era Captain Yonoi, who ends up extremely troubled by David Bowie as a prisoner of war in Merry Christmas, Mr. Lawrence, and Masahiko Amakasu in The Last Emperor. He also composed the soundtracks for both films and plenty of others works such as the 1992 film version of Wuthering Heights, The Revenant or Black Mirror: Smithereens, as well as the 1992 Summer Olympic Games in Barcelona.