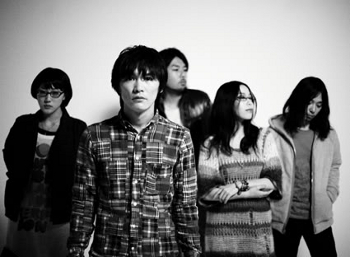 Sakanaction are a Japanese rock band from Sapporo, Hokkaido. They consist of Ichirō Yamaguchi (vocals and guitar) , Motoharu Iwadera (guitar), Ami Kusakari (bass and keyboards), Emi Okazaki (keyboards) and Keiichi Ejima (drums), and their style is somewhere between alternative rock, electronica and new wave. Their name is a portmanteau of sakana (Japanese for "fish") and action, and reflects their desire to act quickly - like a fish in the water - without fearing changes in the music scene.

Between 1998 and 2004, Ichirō Yamaguchi and his fellow schoolmate Motoharu Iwadera were in an indie rock band called Dutchman, and when the group disbanded Yamaguchi decided to keep using the name for his solo project, performing as a DJ at night clubs and working in a record store. A couple of years later he decided to form another band with Iwadera, soon joined by the other members: Kusakari had just left another band, Ejima was introduced by a friend and Okazaki was Yamaguchi's colleague from the record store. When Yamaguchi proposed the name Sakanaction Iwadera hated it, but it eventually stuck. After a couple of albums they decided to move from Sapporo to Tokyo to reach out to more people, and quickly gained popularity, with their first major label album debuting at number 8 on the Oricon weekly charts, and the following album peaking at number 2. In April 2012 the band started to host their own radio show, Sakana Locks!! on the popular radio station Tokyo FM.