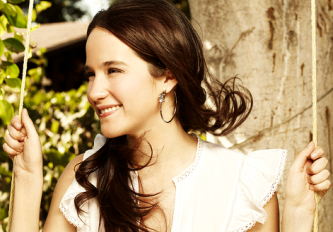 She's from a different world.
"Even though I may not seem Mexican to a lot of people because of the fact that I speak English so well and grew up for part of my life in America, I do think I represent a part of Mexico - I’m just a different face of Mexico. Maybe I’m not your typical ranchero musician living on the border, an image that a lot of Americans may have, but I’m definitely Mexican."
Advertisement:

Ximena Sariñana Rivera (born October 29, 1985) is a Mexican singer-songwriter and actress. She started acting in telenovelas at the age of 11. She earned a scholarship for the Five Week Program of the Berklee College of Music at age seventeen. In 2008, she released her debut album, Mediocre, an album entirely in Spanish. She wanted to record a Spanish-language to stick to her roots and improve her knowledge of the language (she learned English first). It was a huge success in Mexico; it was the fastest-selling debut album in Mexican history. She plans to break into the English-speaking market with her next album; only one song ("Tú y Yo") was in Spanish. Only time will tell if she will be successful in another market.