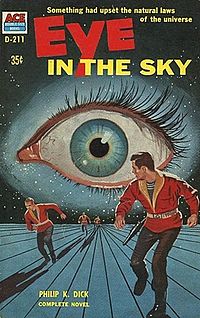 I am the eye in the sky, looking at you...
"Got no human grace, your eyes without a face."
— Billy Idol, "Eyes Without a Face"
Advertisement:

As other tropes indicate, eyes are very, very meaningful. It's a cliché to call them windows to the soul. This trope reminds us that alone, eyeballs are fragile spheres of gel only vaguely reminiscent of their usual purpose of subtle social cues. So a single eye completely outside the context of a face is just creepy. Bad guys often favor a singular, unblinking, Faceless Eye as an insignia— bonus points if said villain is The Omniscient Council of Vagueness that runs a dystopian society of unending surveillance ala The Illuminati. Even without an ominous Big Bad attached, the prospect of a thousand eyeballs shooting you to death with Eye Beams is fundamentally more unsettling than a thousand Mooks with Energy Weapons. Fighting them usually leads to "Go for the Eye". A Cosmic Horror story can involve a vague entity such as an Eldritch Abomination whose eyes are one of the few things to be recognized with the remainder of its body being too horrid to describe and its actions being too alien to understand.

A cyclops character is more relatable than this kind of being, since cyclopes have a recognizable facial structure, with at least a mouth. These examples are far beyond the edges of the Uncanny Continent. It is also interesting to note that the representations of many insane AIs use this trope — most likely to underscore their creepiness.

Of course, being long past the Uncanny Valley already, these examples often also involve Technicolor Eyes, Hellish Pupils, and Red Eyes, Take Warning. Contrast The Blank and Eyeless Face. If an eye is on a part of the body other than the face, it's Eyes Do Not Belong There. See also Oculothorax for monsters whose body is primarily an eyeball. Since they are mostly an eye, they tend to be evil.

Not to be confused with Eyes Without a Face.